The Long Island Breakfast Club is proud to be working with the Pan Am museum in the production of a staged reading of Lana Noone’s play, Children of the April Rain. 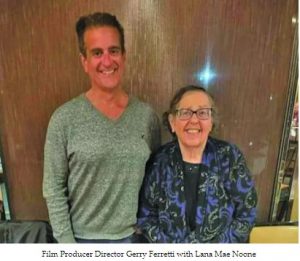 In recognition of Women’s History Month, local author Lana Mae Noone met with noted film director Gerry Ferretti to discuss the upcoming staged reading of her play, Children of the April Rain.

Referred to as the women’s story of the Vietnam War, the play tells the true story of five women and four men, military and civilian, who implemented the Vietnam Babylift, April, 1975. The play will be staged at the Cradle of Aviation Museum on Sunday, April 24th at 5:30 p.m.
Gerry Ferretti, founder and director of the popular New York Film Festival has assembled a talented cast to present the play.
The event includes the Vietnam Babylift play, a tribute to Al Topping and the Pan Am crews who volunteered to assist with Babylift and a light buffet in honor of the 47th Anniversary of the event.
Mrs. None’s grandchildren Heather and Jayden Noone will participate with Jayden playing Taps and Heather singing an original song written for the occasion. Ticket information at www.ThePanAmMuseum.org