Congratulations to Angela Cui and Angela Wang of Tranquility Foot Spa, in Franklin Square and in the new location, Levittown, NY. 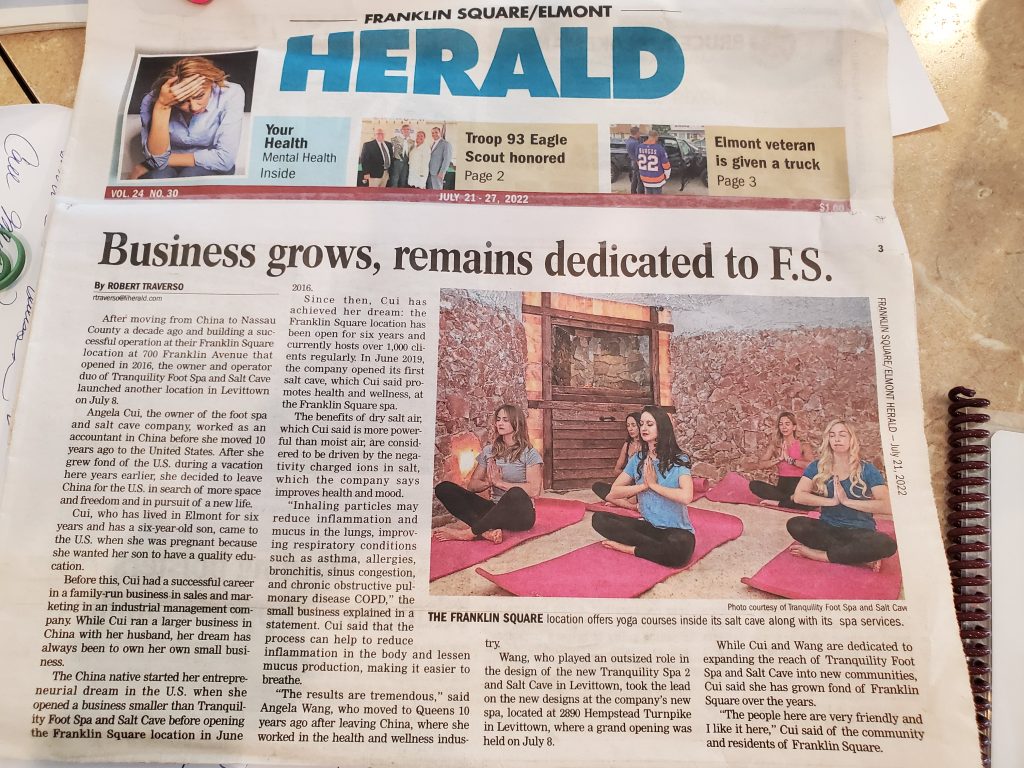 Resident’s play to be read at museum

Plans are underway for the Pan Am Museum Foundation Tribute to Operation Babylift. The event will be held at the Cradle of Aviation Museum, located in East Garden City, on April 24 at 5 PM.

Details to follow for what promises to be an extraordinary event including a meet and greet reception, music, art exhibit, and more.

Looking for new ways to inspire middle-aged residents seeking work after losing jobs, the Long Island Breakfast Club booked former Snapple spokeswoman Wendy Kaufman, once known as the Snapple Lady, for its upcoming meeting on Saturday. Kaufman will share stories about her career and how she dealt with job loss.

West Hempstead resident Valentina Janek, one of the founders of the club, met Kaufman at a Snapple convention 16 years ago at Hofstra University. “Snapple was big back then, and over the years I had a lot of people tell me that I looked like her,” Janek said. “I wrote a letter to her telling her that we looked alike, and we’ve kept in touch ever since.”

Kaufman invited Janek to the convention to take part in a look-alike competition, and Janek won. “Back in the day, people wanted to connect with Snapple in some capacity, and it was really fun hearing from all the fans,” Kaufman said. “When I met Tina, I’m not sure that I saw the similarity right away, but there was something.”

The Breakfast Club, which helps those seeking employment after losing jobs in middle age, relaunched earlier this year. “I know that this is something that’s important to her,” Kaufman said of Janek, “and I do know a little bit about losing jobs, and what’s it like to go from being down and out to turning your life around. It’s my mission in life to do nice things for other people, and to pay it forward.”

Kaufman, who grew up in North Woodmere and graduated from Lawrence High School in 1976, began her career at Snapple in 1991, where she worked in the company’s order department. She started answering fan mail in her free time, and in 1991, executives noticed her enthusiasm for answering the letters. The company decided to build a national campaign around her, and she became the Snapple Lady.

“At first, I rolled eyes at the idea of working in the beverage industry,” Kaufman admitted. “How would I ever know that this would grow into such a phenomenon?”

She worked with the company until 2008. “They would say I wasn’t fired, but they gave me a contract worth nothing,” Kaufman told the Herald.

In the following years, she said, it was difficult to find full-time work. One of the things she learned was that in today’s job market, it’s important for middle-aged people to set their job sights realistically.

“When you’re in 40s, 50s and 60s, it’s not like being in your 20s and 30s,” Kaufman, 60, said. “You need to have humility and you have to step back from false pride, because we all have it, but we all have to realize what’s the fantasy and what’s the reality of our situation. The fantasy will always be much more appealing.”

She began doing infomercials in 2009 for EZ Cracker, a product that removes eggshells. In 2014, Kaufman teamed up with her husband, Steve, when he started a patio furniture business in Massachusetts. Now she is writing a memoir, “From Coke to Snapple: My Life in Ounces,” in which she discusses overcoming a cocaine problem and her time at Snapple. She is also working on a film project. She said she hopes that her memoir will guide people dealing with job loss, addictions and life’s challenges.

Janek said that Kaufman’s experiences, and how she persevered, could motivate others in a similar situation. “She’s a doll,” Janek said, “and I know she’s going to inspire a lot of people at our meeting.”

“Everybody has their story, and I just think it’s incumbent upon us to not give up,” Kaufman said. “In general, God doesn’t make junk, and we can’t treat ourselves as such. If you love it, and you’re passionate about something, it will come.”

The Breakfast Club’s event will be held at the Bristal Assisted Living in Garden City at 9 a.m. It costs $20 to attend. For more information, email Janek at vjanek@optonline.net. 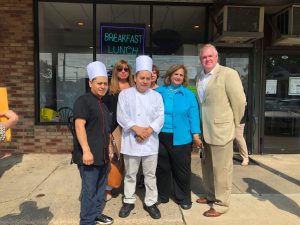 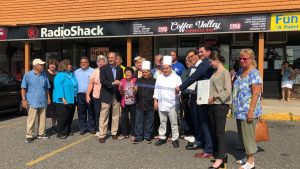 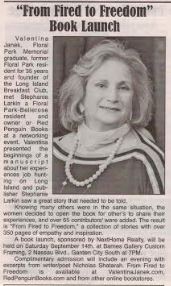 Job Club Fights on With Laughter and Song – CNN 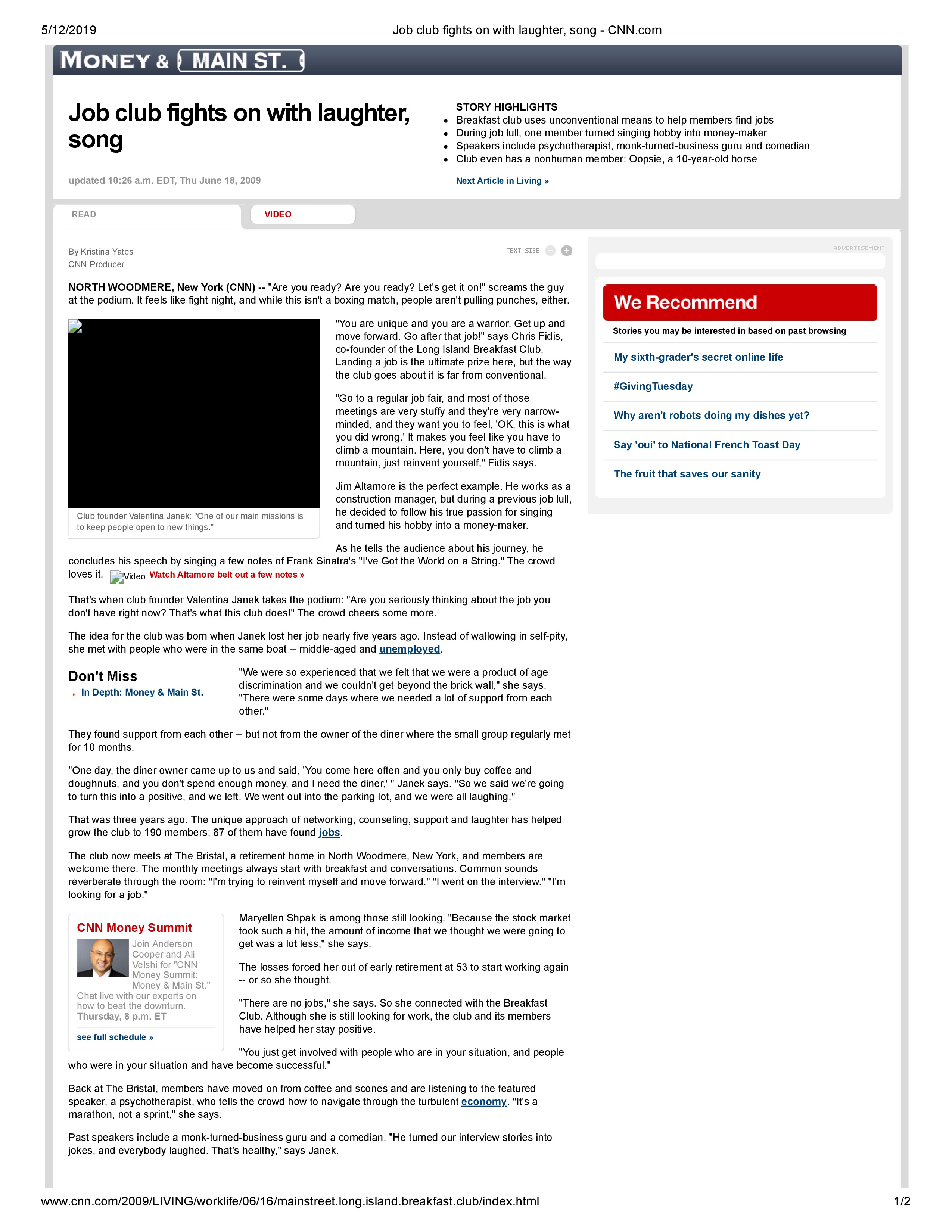 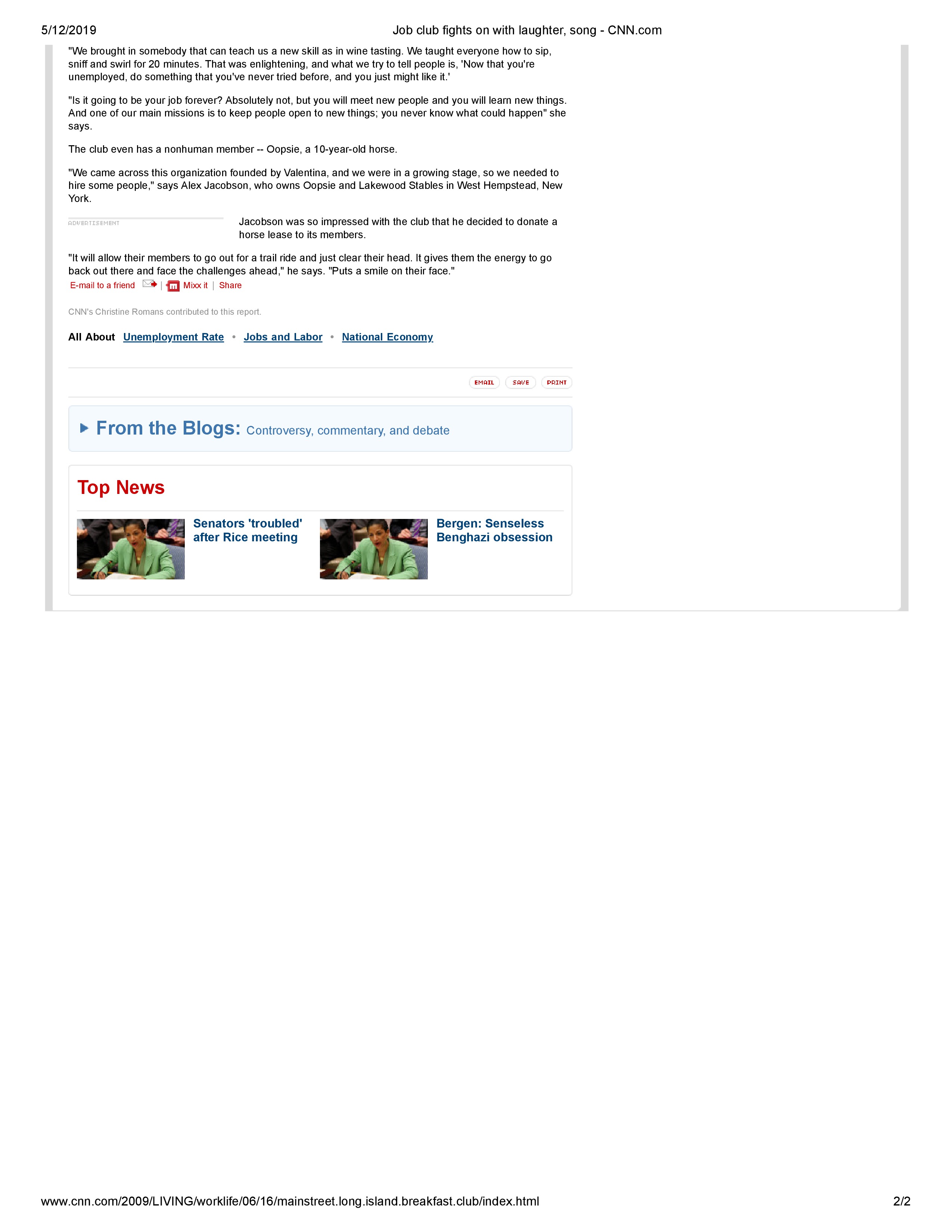 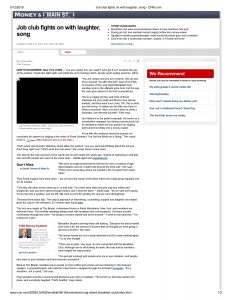 About four years after West Hempstead resident Valentina Janek helped launch the job-networking Long Island Breakfast Club in 2006, she was inspired to share the stories of people seeking employment after losing their jobs in middle age. Eventually, she started to take notes and compile those tales into a book.

“I got to know everybody very well, and because of that, I thought it would be nice to write a book about the club, because it’s given me so much joy,” said Janek, 66, the club’s president.

The new book, “From Fired to Freedom — How Life After the Big Bad Boot Gave Me Wings,” is a compilation of stories about middle-aged people who faced the struggles of losing their jobs, and how they moved forward from those experiences.

Like many members of the Breakfast Club, Janek was laid off from her job. Thirteen years ago, she worked as an operations manager and chief morale officer for CMP Media. Janek realized that she was not alone, and that middle-aged people have a difficult time finding work.

“Losing any job is a wakeup call,” said Breakfast Club co-founder Chris Fidis, 59, who lost his job as an operation implementation manager at Verizon Select Services in 2012.

Fidis said that he and Janek discussed the idea of her book for years, and that along with the Breakfast Club, it will be a “power to be reckoned with.” To move forward from a job loss, Fidis said, “Don’t count on friends. Count on yourself, your family and the man upstairs. You have to pick yourself up, dust yourself off and reinvent yourself.”

“Her new book just captures everything,” said Breakfast Club member Patti Locurcio. “Valentina has such a wealth of information. All she wants to do is help people, and it helps to know that there’s somebody that could relate to this. This book is going to be explosive.”

Janek, who wrote her first book, “In Love and Friendship,” in 2008, said that it brought her a new life. She grew up in Floral Park, and moved to West Hempstead 27 years ago with her husband, Ronald, and their daughter, Jennifer. The Janeks were married for 47 years until Ronald’s death last year.

Valentina said she hopes that through her book — which is expected to be released this fall — and her personal experiences, she can bring more awareness to middle-aged people who are looking for jobs.

“You’re not alone, which is how you feel when you lose a job,” she said. “The worst things in life are a job loss, personal loss and moving. Most of the stories in this book are very positive, and everything has a silver lining.” 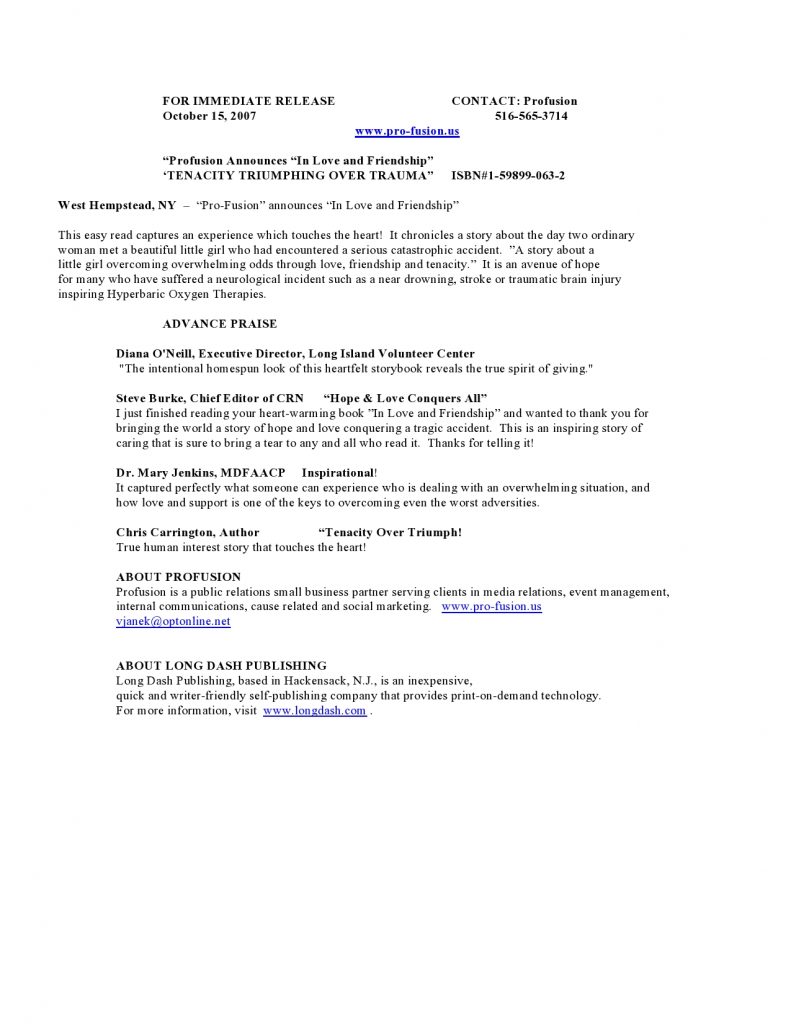