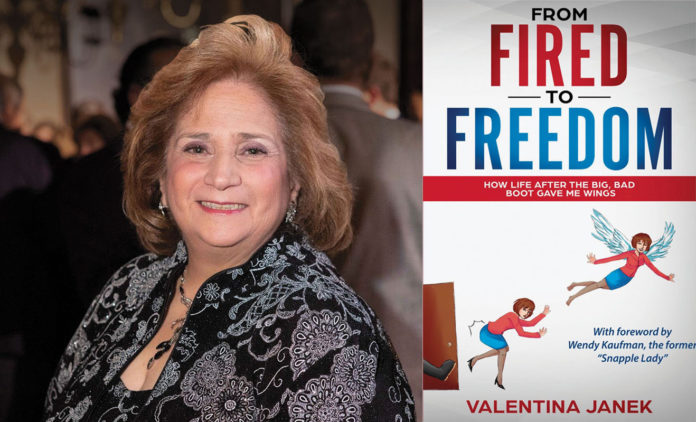 Forget the historically low unemployment numbers; any number of economists can point out what is misleading about them.

One of the sad realities is that millions of white collar workers have been laid off and have never recaptured their earning power. They’ve dropped out of the labor force, settled for hourly employment or have become part of the so-called gig economy.

Valentina Janek, a Floral Park native and longtime resident of West Hempstead who recently moved to North Valley Stream, is one victim of this downsizing. In 2004, she lost her job as operations manager for CMP Media in Mahasset. Even including a period of employment with Nassau County, she has not held a post worthy of her experience and talent set since.

She’s also has had to overcome personal loss in this interval, as both her husband Ronald and sister, Maria, died within a short span.

Janek started the Long Island Breakfast Club to gather people who faced similar midlife, middle class employment challenges. Unlike the classic John Hughes comedy, which featured high school teens, this club featured older citizens who were trying to land suitable employment. According to Janek, the club got The Breakfast Club actor Anthony Michael Hall to come to a meeting once.

“I started the club as a joke, having been on so many interviews and being told I was too experienced, had an income that they would not consider, and [was] too old—without them saying it,” Janek said.

It was at the interviews that she met up with Stephanie Carlino, Chris Fidis, Patricia Locurcio, and JoAnn Fiorentino Lucas, who were cofounders of the club.

“We kept running into each other going for the same interviews and realizing that at 50, we would no be getting considered for the big corporate jobs any longer,” Janek said.

The five started meeting at different  diners to help each other, and the club now has grown to about 50 members. According to its Facebook page, the club “has provided career counseling, support and advocacy for experienced, in-transition professionals on Long Island. LIBC’s goal is to assist with providing referrals, companionship, business networking, contacts for interviewing and mentors for each individual’s success.”

Janek estimates that club members collectively have been on more than 3,000 interviews, but the corporate world was no longer open to them.

“We all convinced ourselves to become entrepreneurial and we now do gigs. Part-time freelance opportunities are easier to come by through networking and speaking to other people in the community,” she said.

In this interim, Janek put out a novel, In Love and Friendship, and last year published From Fired to Freedom: How Life After the Big, Bad Boot Gave Me Wings. According to her website, “This book is a compilation of inspirational, engaging, and even funny stories from people who have received the proverbial ‘pink slip’ and come out alive on the other side, better and brighter for it.”

Much of the material came from stories people told at the Breakfast Club meetings.

Along with her publisher, Stephanie Larkin of Red Penguin Books, and Donna Cariello from Long Island Way—whose motto is “Linking Businesses with Non-Profits for Good”—Janek started the Long Island Writers Club (LIWC) earlier this year. Its aims are to “provide instruction, support, encouragement and community to Long Island’s budding authors.”

Because she hoped to “upgrade” the meeting space for their monthly gatherings, Janek convinced Nicholas Drossos of Frank’s Steaks in Jericho to donate the space and offer discounts on the dinners.

The September meeting of the LIWC drew about 50 people, and Janek called Drossos, “our hero.”

“Valentina came in one afternoon and started talking about her group, and their program,” Drossos related. “She’s a well-spoken woman and had some nice things to say. I wanted to help her out [because her group is all about] helping people out.”

Drossos said he’s 62 and remarried, and has a 6-year-old kid.

“I always think of what would happen to me if I was out of work at my age,” he reflected. “The last couple of years have been tough in this business and I can’t afford to retire.”

Frank’s has been a fixture in Jericho for 31 years, while he and a partner have operated a Frank’s in Rockville Center for 17 years.

On Tuesday, Oct. 1, Frank’s will host the LIWC at 6:30 p.m. Janek will speak on the various publishing options available to authors.

On Tuesday, Nov. 19 at the same time and venue, author Linda Springer will talk about “strategies for managing every author’s two biggest issues—writers’ block and time management.”

The last meeting will be on Dec. 10. Cariello, LIWC founding member from Levittown and author of Ambassadors of Hope, will discuss “exploring character types and development in various genres, including fiction and memoir writing.”

Janek is also active on GovsRadio.com, associated with Governor’s Comedy Club in Levittown. She appears on Mondays and Thursdays at 9:30 a.m.

Visit www.longislanbreakfastclub.org for more information or email Janek at vjanek@optonline.net.

For many years, Floral Park native Valentina Janek has championed for the middle-income, midlife residents on Long Island as the president and founder of the Long Island Breakfast Club, which provides positivity, advocacy, support and career counseling for these residents after they come out of the corporate world. Janek has continued her impact on the community with the publication of her novel From Fired to Freedom—How Life After the Big, Bad Boot Gave Me Wings, a compilation of stories from those who have turned the struggles of being laid off in the middle of their lives into positive outcomes.

“The book is separate from the club, but it was derived because of the club,” said Janek.

Janek herself has experience coming out of the corporate world and attempting to re-enter the workforce with too much experience, education and a cost of living that is not appealing to hiring companies. After being let go from her job as an administrative operations manager at CMP Media, Janek realized the challenges middle class, midlife individuals face if let go from their jobs. The creation of the Long Island Breakfast Club and the publication of this novel were the result.

“We help people who come on hard times and I was one of those people,” said Janek, who has funneled this passion into the growth of the club, which also provides networking, social-preneuring, mentoring and advocacy tips for its members.

Six years in the making, the novel From Fired to Freedom, is a collective compilation of accounts from individuals, members and friends of the Long Island Breakfast Club, who have received what Janek calls the “proverbial pink slip.” Aside from Janek, the 377-page novel is made up of accounts from 77 separate individuals and divided into sections comprised of funny interviews, positivity, facing reality, figuring out options, retirement, and experiences with former employers.

“I finished this book because of the treasured people that came on board with me,” explained Janek. “Even though you did get that boot, you can survive and you will.”
Janek hopes the accounts in the book will do more to spread awareness about the crisis faced by midlife residents in the middle class and the help the Long Island Breakfast Club can provide.

“This is a combination of people that get it,” said Janek. “You’re not alone, which is how you feel when you lose a job. The worst things in life are a job loss, personal loss and moving. Most of the stories in this book are very positive and everything has a silver lining.”

Janek’s biggest goal is to invoke motivation and inspiration.

“My biggest mantra is to tell people to get up, get dressed and show up, and that is what I will write in every book that I sign,” said Janek.

The novel will be for sale on Janek’s website and on Amazon. Moving forward, Janek looks to expand the Long Island Breakfast Club by commissioning a class on how to write a book, CPR training and continued networking and counseling.

“I want to be that person people want to hear to be positive and help others,” she said. “I want to explain to employees to be ready for the boot when it happens.”

Just four years after West Hempstead resident Valentina Janek helped launch the job-networking Long Island Breakfast Club in 2006, she was inspired to share the stories of people seeking employment after losing their jobs in middle age. Eventually, she started to take notes and compile those tales into a book. The Breakfast Club will have a special networking party for the book on Feb. 26.

Like many members of the Breakfast Club, Janek was laid off from her job. Thirteen years ago, she worked as an operations manager and chief morale officer for CMP Media. Janek realized that she was not alone, and that middle-aged people have a difficult time finding work

The new book, “From Fired to Freedom — How Life After the Big Bad Boot Gave Me Wings,” is a compilation of stories about middle-aged people who faced the struggles of losing their jobs, and how they moved forward from those experiences.

“The bottom line is this: The middle-aged are overlooked on Nassau County,” Janek said. “I’ve met with local politicians on this, but it’s still an issue that needs to be addressed.”

The organization provides employment and career counseling, workshops, interviewing classes and referrals, among other assistance, to help those seeking employment after losing jobs in middle age. The club also hosts meetings each month, which include sessions at which attendees can discuss job interviews and listen to motivational speeches. At their meeting in December, the club featured former Snapple spokeswoman Wendy Kaufman, once known as the Snapple Lady.

Now the club has roughly 50 members, including residents of both Nassau and Suffolk counties.

Janek, who wrote her first book, “In Love and Friendship,” in 2008, said that it brought her a new life. She said she hopes that through her book and her personal experiences, she can bring more awareness to middle-aged people who are looking for jobs.

“This is a very exciting for myself and the club,” Janek said. “I can’t wait to see how everything turns out.”

The event will take place at the Ethical Humanist Society of Long Island, at 38 Old Country Road in Garden City. There is a $20 fee per person. 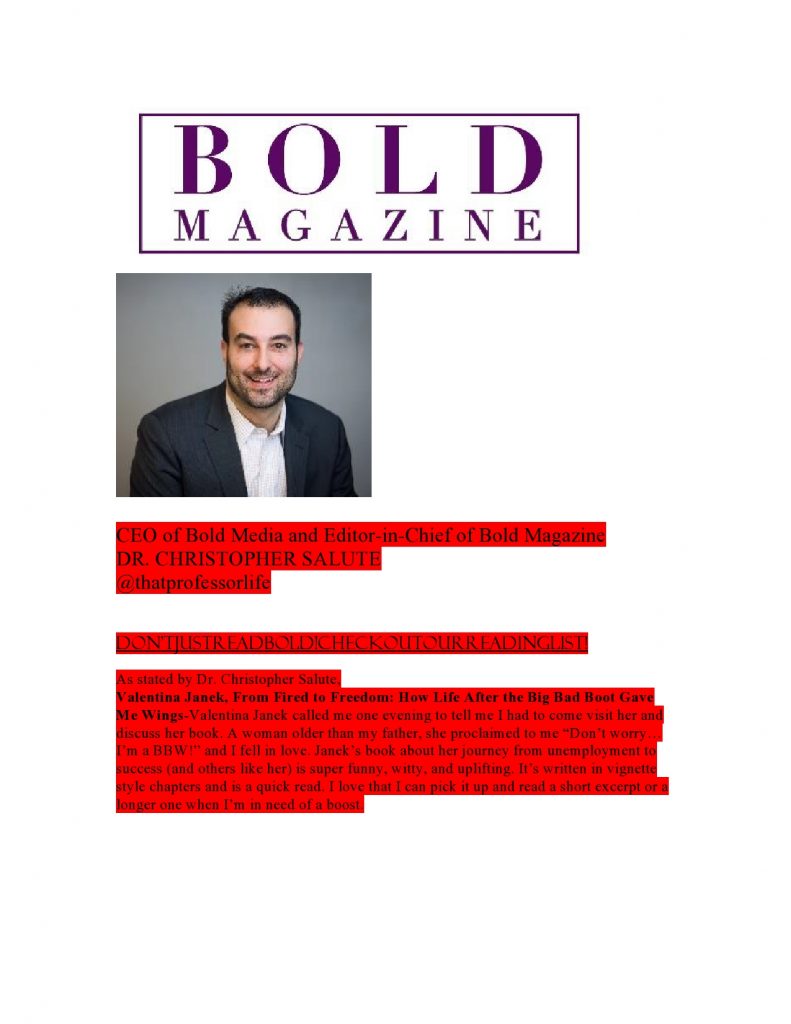 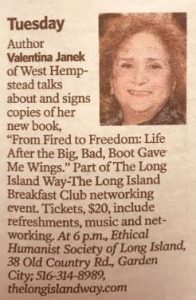 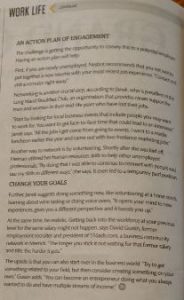 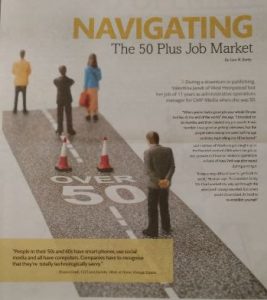 Valentina on the Radio