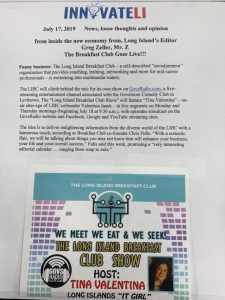 As a dedicated Long Island community advocate, our content will be diverse. You name it, we will talk about it. I wanted to reach out to ask for your participation in this very new and inaugural radio podcasting initiative. I believe you will find out so many interesting things about people, places, and things that are available to Long Islanders. Specializing in many different arenas, the Breakfast Club’s motto is, we meet, we eat and we seek. With a comedic flair, we will be talking about things you may not know. Our hope is that we enlighten you about what’s available on Long Island. There will be very interesting and different guests and topics ranging from from soup to nuts!!!! Yes, nuts!!!!

A great addition to any business marketing strategy, podcasting is the newest way to reach a new audience, which include Long Islanders, small medium and large business owners and diverse individuals that could eventually be a new audience of clients, friends, and vendors enhancing your business model and client base. I have attached an upcoming calendar for your review. Sponsorship podcast advertising that include guest appearances are available.  For questions, and inquiries about sponsorship opportunities, please call “Tina Valentina” at GOVSRADIO.COM  at 516-314-8989 or email vjanek@optonline.net to boost your presence on Long Island.

Gregory Cajuste is a businessman, family man, and a true community man. He is a born and raised New Yorker with grit, passion, and resilience running through his veins. After graduating from high school, he enrolled in the U.S. Marine Corp where he finished top of his class and served our country. Thereafter, with his savvy business sense and out of the box thinking he became a self-made entrepreneur. He has successfully built up and sold several establishments which include a dry cleaning business, a real estate company, and a sportswear line but it doesn’t stop there. In fact, there is nothing he is afraid to tackle. One of his biggest accomplishments is going from being a livery driver to building up and owning his own successful limousine company with a fleet of over 200 cars. He then went on to take over Lucky Bar 13 and made it into one of the most popular bars on Long Island. His latest venture is opening up G’s nightclub in West Hempstead. Gregg’s vision of G’s is to have an exciting new club that brings the feel of a New York City nightclub right into our own backyard.

Gregg passionately dedicates most of his time to helping others. As a founder of a non-profit organization on Long Island, Greg continues to fulfill his passion of helping others. During his time with the Kiwanis Club of Franklin Square, his involvement in Kiwanis International continued to help improve the quality of life for children around the world. In three short years, Gregg went from being a member to vice president and just completed his term as president of his club. He has gone above and beyond with the help and support of his members to give back to those in need. He organized a successful fundraiser concert for Breast Cancer with proceeds benefitting Adelphi’s Breast Cancer Program. He didn’t stop there, he went on to organize another fundraiser concert this time for the Kiwanis Pediatric Lyme Foundation which was another success and helped several families with medical costs. Education is also very important to Gregg, so he has created several scholarships to help local high school seniors with rising college costs. In his own words “Family, friends and giving back to his community is what matters most to him”.  Gregg has become a mentor for individuals at the Long Island Breakfast Club and is the Co-Host on the Long Island Breakfast Club Show with Tina Valentina at GovsRadio.com.  He was named LongIsland Hero at the annual fight for ovarian cancer event held in 2006 in memory of Joann Fiorentino Lucas.

A resident of West Hempstead, Gregg is married and is called the family guy where he lives with his dynamic wife and children.  His can-do attitude has been a spark of to the community and all the members of the Long Island Breakfast Club.

Log into Facebook
Search Govs Radio
Wait to see red icon in the corner that says “LIVE.” That indicates the show is now live.

The live show can be seen there as well.

The live show can be seen there as well.

Valentina on the Radio